This cheesy lentil and veggie slice is absolutely packed with flavour, and it can be made with store cupboard ingredients, using whatever veggies you have in the house!

This cheesy lentil and veggie slice is far more tasty than it has any right to be. Cheese, eggs, lentils, and a variety of vegetables – all very simple, everyday ingredients, but they come together to make a seriously irresistible and seriously versatile veggie slice!

This veggie slice is part frittata and part lentil loaf – somewhere in between the two, it’s moist and light, but also filling and full of protein. Best of both worlds!

It’s got so much more flavour than you’d expect from the simple ingredients. Mixing some grated cheese right into the egg mixture ensures it’s tasty throughout (it works so much better than just sprinkling the cheese on top), and all the different vegetables bring their own flavours and textures to the dish as well.

One of my most popular recipes of all time is my very veggie lentil bake – check out the star ratings and the comments on the blog post! At least once a week, someone sends me a photo of their version and tells me how much they enjoyed it.

This veggie slice is similar in that it’s made with simple ingredients, full of flavour, and can be switched up to use whatever veg you have in the house.

If you loved the very veggie lentil bake, you’ll love this lentil and veggie slice too!

As with lots of my recipes lately (for obvious reasons!), this veggie slice is a true store cupboard recipe, which can be made from ingredients you probably already have in your house.

If you don’t have the exact vegetables I used, feel free to swap them out for whatever you have in the fridge – this sort of recipe is incredibly easy to adapt. It’s the sort of thing I never make the same way twice – once you’ve got the base of the recipe sorted, you can switch up the veggies, herbs and spices, etc., to create all sorts of different versions.

The recipe is really simple.

To start, get your lentils on to boil. Red lentils are perfect for this veggie slice, as they break right down, rather than holding their shape.

Once they’re cooked into the cheesy egg mixture, you’ll barely even be able to see that they’re there, but they do a great job of making this veggie slice extra satisfying, as well as stretching it to feed more people.

What vegetables can I use in my veggie slice?

To make my cheesy veggie slice, I used:

In all honesty, these were literally just the vegetables I had in the house – you certainly don’t need to make a special trip to buy any of these particular veg.

Other veggies that would work really well:

…or pretty much anything else you’ve got that needs using up.

Just make sure you chop your veg fairly small, as big chunks could cause your lentil slice to fall apart.

Can I use frozen vegetables for this veggie slice?

Yes! I use frozen vegetables all the time, and especially if you’re trying to avoid making special trips to the shops, frozen veg are really handy to have.

As you’ll see, I used frozen mushrooms in this recipe, for no other reason than that’s what I had. I also often use frozen peppers, frozen onions, frozen peas, and frozen sweetcorn.

Just make sure you cook the frozen veg thoroughly in the pan before assembling your veggie slice, so they don’t make it soggy.

Once your lentils and vegetables are all ready to go, just mix in the eggs and plenty of cheese, and pop it in the oven to bake!

When it’s cooked, it will be firm, but still beautifully moist inside. It’s a really pleasant texture that I will definitely be experimenting with again!

How should I serve this veggie slice?

One of my favourite things about this cheesy lentil and veggie slice is how versatile it is.

However you serve it, you will definitely love this veggie slice! 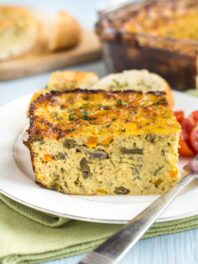 Note: Nutritional information is approximate, and will depend on exactly what ingredients you choose. Information above is for 1/6 of the recipe.

This was so delicious! I will definitely add it to my rotation. My meat loving husband went back for 2nds. My fussy kids actually ate it. I skipped the mushrooms and added celery and carrot. I also chopped the veges up super finely in the food processor. I think you could add sny combination of veges into this dish and it would work, even one of those prechopped vegetable soup mixes would work I think.

Thanks Kate, glad you all enjoyed it! :)