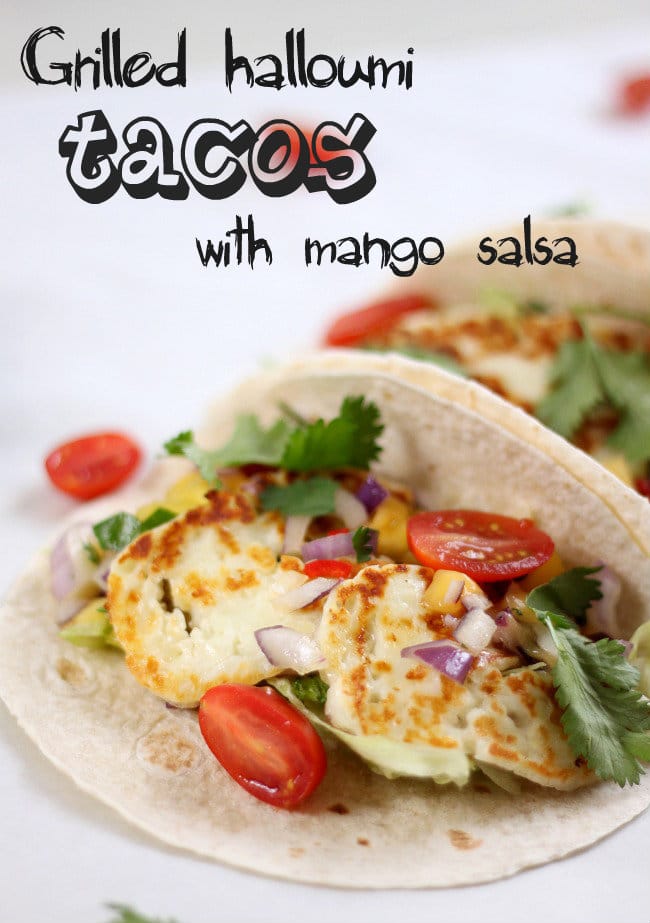 Hola! I’m back from my honeymoon in Mexico with a few new words in my vocabulary – cerveza, cóctel, and ginebra, to name but a few. To be honest I actually got back last week, but we’ve been having a new kitchen fitted (it was supposed to be finished while we were away but, as we should have foreseen, is taking much longer than expected), and I haven’t really been able to get into the kitchen much. So I apologise for my quietness over the last week! I’m sure you’ll all be thrilled to know that I am actually still alive.

As for the honeymoon, we spent two blissful weeks in Cancun. As well as sipping cocktails in the pool (just as I wanted), we also did some slightly more energetic things like snorkelling, jet skiing, quad biking, scuba diving… I’m not too sure how my husband managed to convince me to leave the pool, but even though it took him several hours to drag me away, it was worth it, because it was all ridiculous fun. Best of all, I even earned a certificate for winning a game of bingo. Dream come true! 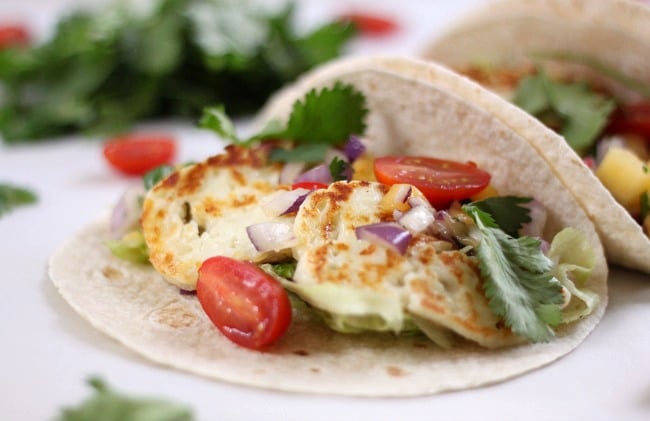 We stayed in a hotel called Riu Caribe, which I would totally recommend to anyone looking to have a relaxing all-inclusive holiday in Mexico. All-you-can-eat buffets for every meal (my plates tended to look like a demonstration of all the different kinds of carbs you can get. I did take a photo but I won’t frighten you with it), drinks dispensers in our hotel room that were fully stocked with rum, gin, vodka and tequila, an awesome pool (complete with a swim-up bar), white sandy beach… seriously idyllic. I’d go back in a heartbeat!

I suppose I had better share at least one honeymoon photo, since I had quite a large number of people tell me that they couldn’t wait to see photos. This surprises me, because I always thought holidays were just like weddings, babies and pets – not all that interesting unless they involve you personally. But, I have to keep my fans happy (joke!) so here’s a photo of me and my brand new husband on one of Mexico’s incredible sandy white beaches, in front of the boat we snorkelled from. I’m on the right, if you couldn’t tell. Enjoy this photo while it lasts, because he’ll probably tell me to take it down as soon as he spots it. 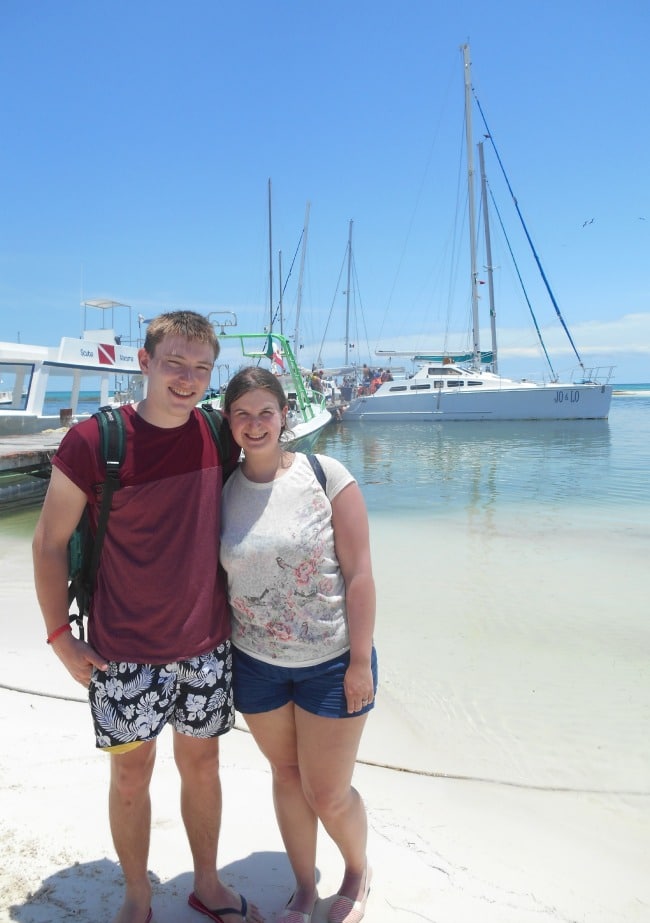 Several disclaimers because I’m socially anxious like that: we’d just been snorkelling so my hair looks a total state (I usually look less like a Lego man). I’d spent the last few days in the sun, so I’m not always that lobster-like. And I’m fully aware that I shouldn’t wear shorts that short, but I was in Mexico, so obviously all caring went out the window.

When I asked on my Facebook page what sort of recipe you guys would like to see next, a few people said they’d like to see something inspired by our time in Mexico. In truth, I didn’t actually eat that much Mexican food while we were away – there were plenty of black beans and the occasional quesadilla, but there were no burritos or enchiladas in sight! The buffets in the hotel were actually a mixture of all sorts of foods, rather than just consisting of Mexican food. So although these tacos are obviously inspired by the traditional Mexican dish, they’re not exactly authentic. Instead, I decided to keep things light and fresh with plenty of fruit and veg – I do have about a million holiday pounds to lose, after all (one day I literally had a three course meal for my breakfast). Thus: grilled halloumi tacos with mango salsa. 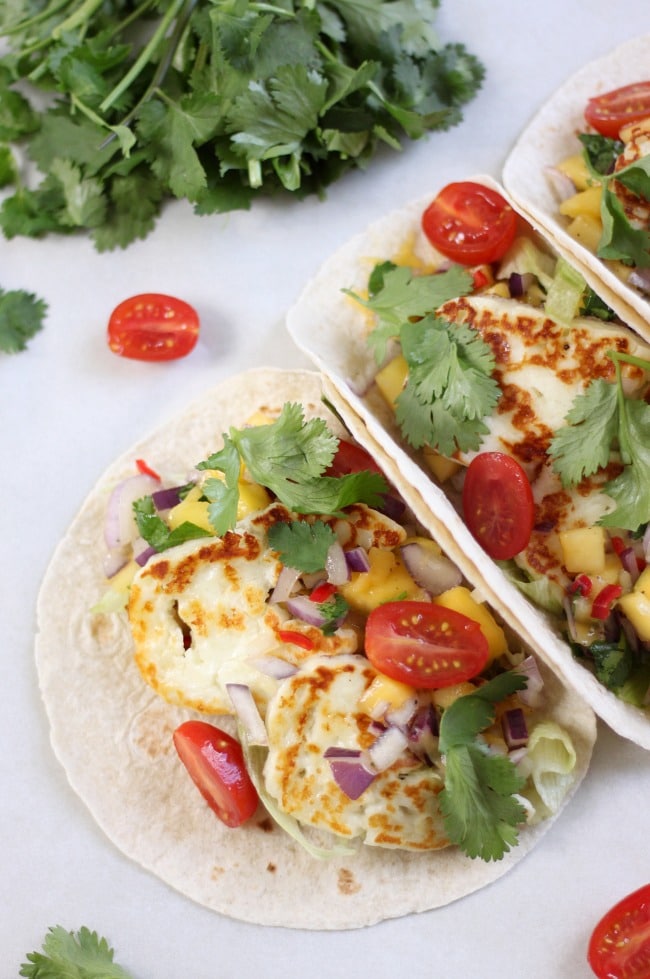 I’ve paired halloumi with pineapple in the past (see my halloumi and pineapple pancake), but never mango. However, it works ridiculously well – the salty halloumi goes just perfectly with the juicy, sweet mango. Add some red onion, fresh coriander and a little bit of red chilli, and you’ve got yourself a winner.

If you’re not trying to lose Mexico pounds, you might want to up the amount of halloumi in this recipe (or is that just the cheese lover in me talking?) – these tacos are heavy on the fresh veggies. However, for me, the ratio was perfect – just enough halloumi to keep me happy, with a good heap of that fresh mango salsa to fill me up. I also added some shredded lettuce and a few cherry tomatoes, but they’re not integral to the recipe, so if you like you could swap these for whatever other veggies you think will work well. 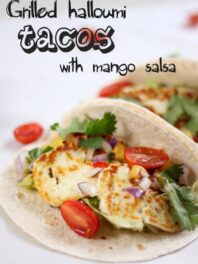 For the mango salsa 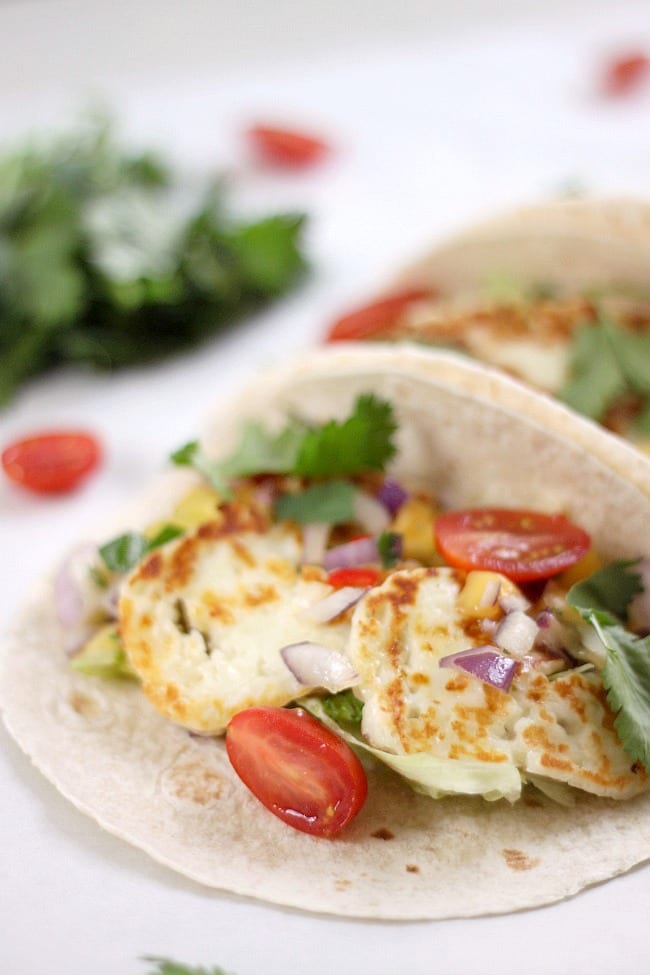 If you’d prefer an alternative taco recipe, take a look at my vegan lentil and black bean tacos: 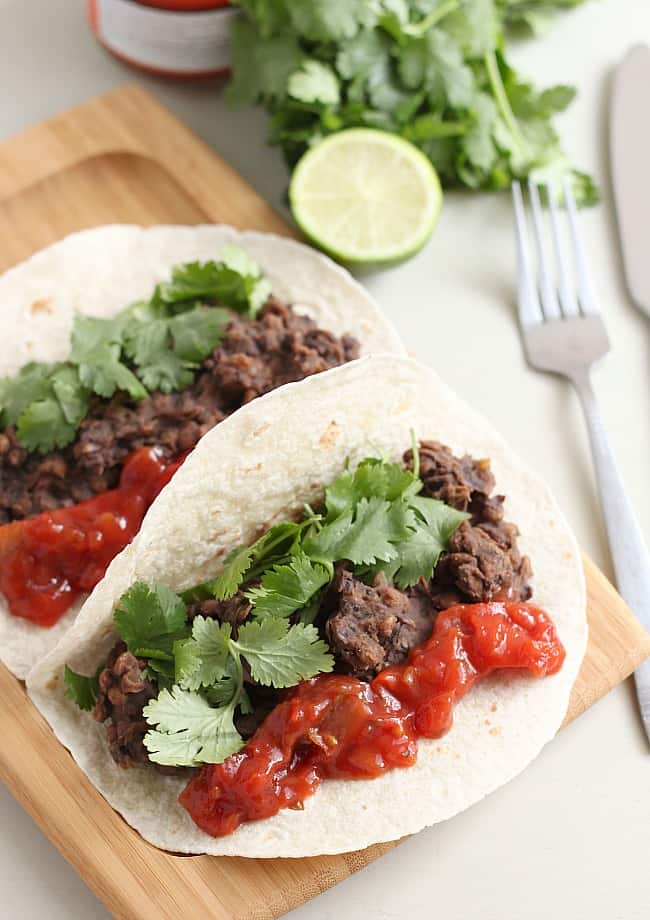 (PS. If you’re wondering, I will share a couple of wedding photos eventually, but I’m waiting until we get our photos back)

Hey, this recipe looks delish, and I just wanted to chime in that no disclaimer needed on honeymoon photo (although that's a few years in the past by now). You look absolutely adorable, the shorts are fab, and the huge smile on your face (and your hub's) says it all!

Ahhh thank you so much! I'm currently 7 1/2 months pregnant with number 2, and feeling about how you'd expect, so your lovely comment definitely helped to put another big smile on my face :) Thank you for being so kind!

This looks fantastic, I can't wait to try the recipe, thanks for sharing. And, by the way, you look great in that photo! So happy...

Made these for dinner tonight, they have been on my "to do" list for some time. You originally turned me on to Halloumi cheese a few months ago with another one of your recipes and now I'm totally obsessed with it. Anywho, back to the tacos....all I can say is that 1) Holy Amazeballs! 2) My husband gave them a "10" saying best taco I've ever made. 3) I fell head over heels in love with the mango salsa and 4) we are having them again tomorrow night. Pinned it, made it, loved it! More Halloumi cheese recipes please!!! :-)

Yay! You're too nice, thank you so much, so pleased you both enjoyed them so much! :) You can see all my halloumi recipes here if you'd like more inspiration https://www.amuse-your-bouche.com/tag/halloumi/

Congratulations on your wedding, and welcome back from your amazing honeymoon! It sounds like it was a wonderful getaway, and I'm glad it inspired these tacos :)

Congratulations; sounds like you had a wonderful time. I love Halloumi so seriously drooling over this!