These homemade ricotta gnocchi are so light and fluffy, and much quicker and easier to make than potato gnocchi!

Ricotta gnocchi are light, fluffy little cheesy dumplings that can be whipped up in 45 minutes or so. They're much quicker to make than regular potato gnocchi, and in my opinion, they're even tastier. Here's how you make them!

Gnocchi are (is?) little dumplings that are generally served in a similar way to pasta - usually as a meal in their own right with some kind of sauce, but also sometimes as a side dish.

Usually, the base of gnocchi is mashed potato (sounds weird; makes a great dumpling), but these ricotta dumplings have no mashed potato at all - they use (you guessed it) ricotta cheese instead. It doesn't sound like ricotta and potato should ever serve the same purpose, but somehow it works!

One other fun fact about gnocchi: You know those words that stop making any sense when you look at them for too long? Gnocchi is one of those words. Nyocky. Nuuyooockiiii. It can't be right.

I've made homemade gnocchi a few times in the past, but the potato version can be a bit of a faff. Before you can even start on the gnocchi itself, you have to peel and boil the potatoes, and then mash everything to within an inch of its life (nobody likes lumpy gnocchi). I did discover that frozen mashed potato makes great homemade gnocchi and cuts out a lot of the prep time - but ricotta gnocchi is even quicker still!

Ricotta gnocchi are also lighter and fluffier than potato gnocchi, as you might expect. I think I like them even more, if that were possible.

It might sound like swapping potatoes for ricotta cheese is an effort to make low-carb gnocchi... but that's not really the case. These ricotta gnocchi contain about 36g of carbohydrates per serving, so although they're not as carb-heavy as potato gnocchi, they're far from low-carb.

Luckily, I'm very much in favour of carbs in all their beautiful forms.

How to make homemade ricotta gnocchi

Step 1: Mix up the gnocchi dough

Here's where ricotta gnocchi are so much quicker to make than potato gnocchi:

That's it - no peeling, no boiling, no mashing, no faffing with potatoes at all, just straight to mixing. In fact, you don't even need to do much mixing - just enough to bring it all together into a fluffy dough.

Next, split the dough into a few chunks. I find 8 pieces is pretty easy, as you can quarter the ball of dough, and then cut each piece in half one more time. It doesn't matter if they're not perfectly even.

Using a little more flour to stop it sticking to your worktop, roll each piece into a snake. Try to make them a similar thickness, but it doesn't matter if some of your snakes end up longer than others (you'll just get slightly more dumplings from that snake!).

Then just cut them into chunks! The size doesn't matter - it just depends on how big you want your dumplings to be. And don't worry too much if they're not quite even - I definitely ended up with a few piddling little ones from the ends of the logs!

Add the dumplings to a pan of boiling water. You can cook them in a couple of batches if needed, so you don't overcrowd the pan.

Gnocchi (both potato gnocchi and ricotta gnocchi) cook really, really quickly - maybe a minute or two in boiling water. You'll know they're cooked when the dumplings begin to float - just fish them out of the pan with a big slotted spoon.

At this point, your gnocchi are edible. In fact, most of the times I've ordered gnocchi at a restaurant, they've just been boiled. But personally, I find that boiled gnocchi can be pretty dense and claggy - much like you would expect boiled dough to taste, really. The cheesy flavour is nice, but the texture leaves a lot to be desired. Which brings me to...

The difference in texture between gnocchi that have just been boiled, and gnocchi that have been boiled and then sautéed, is pretty incredible. They're immediately transformed into light and fluffy dumplings, and the crispy bits round the edge are an amazing bonus. I never, ever skip this step.

I've actually written a whole blog post all about how to fry gnocchi, so check that out if you'd like more detailed instructions. It applies to all sorts of gnocchi - shop-bought gnocchi, homemade potato gnocchi, and even this incredible ricotta gnocchi.

Just shallow fry the gnocchi in a bit of oil (or even better, melted butter), until they're golden brown and crispy.

Just like pasta, you can serve your ricotta gnocchi with any kind of sauce or veggies that you like. A tomato and mascarpone sauce would be amazing!

How to serve gnocchi

Since gnocchi dumplings themselves are quite filling, I usually avoid adding a sauce that's too heavy or rich. I'm not a fan of gnocchi in thick sauces, for example - they just end up too heavy and stodgy.

In my opinion, a thin sauce tends to be better. I love something light and buttery - even just some garlic butter and fresh herbs works wonderfully.

This time, I went for garlic mushrooms and a dollop of basil pesto - so simple, but so effective.

And that's all there is to it - about 45 minutes start to finish, including adding your sauce. As much as I love potato gnocchi, I think ricotta gnocchi is the way to go when you're making it at home - so much less faff!

Can you freeze ricotta gnocchi?

Yes! Ricotta gnocchi freeze really nicely. Just lay the uncooked dumplings in a single layer on a baking tray, and freeze. Once they've frozen, you can transfer them into a ziplock bag. This stops them from freezing together into one big lump.

When you're ready to cook the dumplings, put them into the pan of water straight from frozen. Since they're frozen, they'll just take an extra minute or two to cook. Then, you can continue as normal.

Since homemade gnocchi do take a little time to make, it's a great idea to make an extra big batch, and freeze some of it for later.

Have you ever made homemade ricotta gnocchi? If you have any other top tips to add, let me know in the comments below! 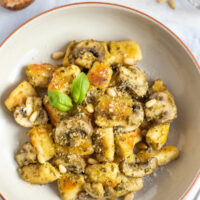 These homemade ricotta gnocchi are so light and fluffy, and much quicker and easier to make than potato gnocchi!

If you sometimes find gnocchi a bit heavy, why not try lightening them up by tossing them through this toasted gnocchi salad: