Have you ever read the Cranks Bible? Don't worry, I'm not getting all religious on you - it's a vegetarian cookbook full of really interesting and original recipes. The kind of cookbook that you'll 'ooh!' your way through as you turn down the corner of every single page. This autumn, Cranks are bringing out a brand new edition, with all new recipes, including a few by Michelin-starred chef Richard Corrigan (remember him from the Great British Menu?).

One of the most popular recipes from the original Cranks Bible is their homity pie, and Cranks challenged me to put my own spin on the recipe - hence, homity pie bites!

These pie bites are not quite bitesize - more like two or three bites, depending on the size of your mouth and whether or not you're in polite company - but they're super cute, and great for an occasion where a normal pie is just not quite posh enough.

If you don't know, homity pie is basically a cheesy leek and potato pie. It's a traditional British recipe - we sure did know how to make the most of things during the war. Since the filling of these little pie bites is on the stodgy side (which isn't a bad thing - I love me a bit of stodge), I went light on the pastry, and just used a couple of sheets of filo. It's much thinner and lighter than, say, shortcrust or puff pastry, and much lower in fat too.

So eat away! And don't forget to submit your recipe for a chance to appear in the new Cranks cookbook! 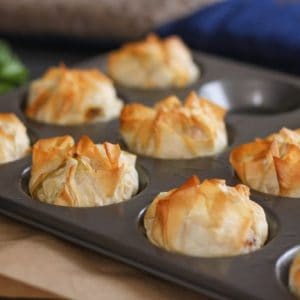