These honey BBQ cauliflower wings are sticky, smoky and sweet – dig in with your hands and get sauce all over your fingers! A great party appetiser.

I’ve eaten cauliflower wings a few times in various places, and they’re always delicious. I can’t believe a few years ago I thought I didn’t like cauliflower! Once you try it cooked like these honey BBQ cauliflower wings, you’ll be a cauli lover for life.

What are cauliflower wings?

Cauliflower wings are a bit like chicken wings, except… they’re made from cauliflower.

Now, of course, they don’t taste anything like chicken. I’ll say it again: they’re made from cauliflower. There is nothing remotely chicken-y about these wings.

I’ve actually never eaten a chicken wing in my life, but I’m still pretty confident that if you feed these cauliflower wings to a meat-eater, they will not think they’re chicken.

So why are they called cauliflower wings?

Despite tasting nothing like chicken wings, these are called cauliflower wings because they do bear some similarities to the chicken version:

And honestly, considering the major flavour of these wings is the sticky honey BBQ sauce anyway (the cauliflower is really just a way of getting it into your mouth in a slightly more socially acceptable way than just eating sauce straight from a bowl…), these cauliflower wings will definitely scratch the itch if you’re craving wings.

To make these baked cauliflower wings, start by mixing up a simple batter – just flour and milk, plus some seasonings. I used dried herbs, garlic granules, and salt and pepper.

Dunk in the cauliflower florets, make sure they’re all well coated, then place each piece on a baking tray to roast.

This batter just helps the roasted cauliflower to get extra crispy, as well as imparting all those yummy flavours.

Then, it’s time for the second layer of flavour – the honey BBQ sauce! This stuff is incredible. Just BBQ sauce, mixed with a bit of honey to make it extra sweet and sticky – unreal.

You could make homemade BBQ sauce from scratch if you like, but at this time in my life (two self-employed adults + two tiny kids + no childcare), there was zero chance I was going to do that, so I took the easy route – just shop-bought BBQ sauce with added runny honey. It’s quick and easy, which I’m sure is a major plus for most of us!

Dip each piece of roasted cauliflower into the sauce, and pop them back in the oven.

After their second bake, the cauliflower wings will be so sticky, smoky and sweet – the flavour is amazing.

The cauliflower itself is soft, and takes on so much flavour from the honey BBQ sauce. I’m sure smothering your vegetables in a sugary sauce isn’t the healthiest way to eat them, but oh my gosh, it tastes amazing.

How to serve cauliflower wings

These cauliflower wings have so much flavour that I personally think they’re best served on their own, rather than as a side dish alongside something else – they’d end up overpowering whatever else is on your plate.

Instead, pile them up in a bowl, add a dip, and dig in. I used a sour cream and chive dip, which worked amazingly.

I know I photographed these honey BBQ cauliflower wings being daintily dipped with a fork, but it’s so much more fun to get your hands right in there, the sticky sauce coating your fingers. Then you get to lick them clean afterwards! 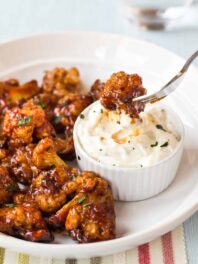 Note: Nutritional information is approximate, and will depend on exactly what ingredients you choose. Information above is for 1/2 the recipe, not including dip.

Hosting a party? These carrot and cheddar bites are another of my favourite appetisers!

I've tried to make cauliflower wings so many times and failed - these were delicious, thank you! (had them with some chips, totally a meal right...?) My dad is also co opting this recipe to make a peri peri version...

Ahh yay, glad you liked them!! Totally a meal ;)

OMG these look sooooo good! I'll try to make a vegan version next time I get cauli

Thinking... Frozen will probably be too soggy won't it? I'll wait till I buy some fresh I think

Hmm yes I think you might be right about frozen cauliflower!

Oh, my goodness - these sound amazing. Not sure how many would make it from the baking tray to the serving dish though!! 😋🤤😁

Haha yes it was a struggle :D