These parmesan baked fava bean chips are a crispy, crunchy snack idea – perfect for entertaining, or for a nut-free lunchbox snack!

I’m so glad I discovered how to make these little baked fava bean chips. They’re such tasty little nibbles, and can be used in all sorts of ways: everything from a classy appetiser to serve with wine, all the way to the other end of the spectrum, as a fun nut-free snack for your kid’s lunchbox. They’re so easy to make too!

What are fava beans?

Fava beans (also known as broad beans) are often eaten in their fresh, green form. They’re used all over the world in all sorts of ways (check out this list!).

If you buy fava beans in their dried and split form, when they are small and light brown in colour, they’re perfect for making these crunchy fava bean snacks.

Dried split fava beans actually aren’t the easiest thing to find, at least in the UK, but you can buy them online. I bought these ones* from Amazon – it’s about a fiver for a bag, but one bag is enough to make 4 batches of fava bean chips, so it works out pretty economical overall (cheaper than buying 4 big bags of fancy crisps!).

When fava beans are roasted, they become crispy and crunchy, and a brilliant alternative to potato chips or roasted nuts. I discovered them around Christmas time a few years ago. Every year at that time, we avoid having to make actual meals by surviving solely on little canapés and snacks for about two weeks. And these crispy fava beans are one of my favourite little nibbles!

You can flavour your fava bean chips with anything you like. I used vegetarian parmesan cheese (‘real’ parmesan is made with cow’s rennet, which isn’t veggie), and it works so well. Not only do you get the crunchy beans themselves, but you also get little flecks of crispy parmesan cheese, which brings so much flavour. Is there anything that tastes better than crispy cheese?!

First, boil the dried beans until they’re soft. It takes half an hour or so, so I’d recommend boiling them while you’re doing something else (cooking dinner / cleaning the kitchen / chatting on the phone, etc…), just to save time.

Add some olive oil, and spread the cooked beans out on a baking tray. At this point, you can add plenty of salt and pepper, and whatever dried herbs and spices you fancy.

This time, I just used some mixed Italian-style dried herbs. In the past I’ve used my beloved smoked paprika instead, which also works well (though it does turn the fava bean chips a bit neon orange!).

Step 3: Part-bake, then add the parmesan

Roast the fava beans for about 20 minutes, until they’re starting to crisp up. Then add the finely grated parmesan, and mix everything together. This is where the magic happens – pop it back in the oven again, and as the cheese crisps up, it will bring so much amazing flavour to the beans.

After another 15 minutes in the oven, the fava bean chips will be golden brown and crispy all over.

You can eat them warm, straight off the tray (my preferred method, mainly due to my lack of self-control). Or, you can leave them to cool, then store them in an air-tight container until you’re ready to eat.

My daughter’s starting school later this year, so I’m trying to stock up on ideas for nut-free lunchbox snacks. Most schools here don’t allow any nuts in lunchboxes due to potential allergies in the school, and these fava bean chips are a perfect alternative.

They’re nut-free, so able to be packed in school lunchboxes (as well as being suitable for those who suffer from nut allergies, of course). They serve the same function as a bag of crisps, but they’re a nice change, and will keep your child full all afternoon.

They’re also a bit less intensely crunchy than nuts, so less of a choking hazard for young kids.

How to serve fava bean chips

There are plenty of different ways to serve these fava bean chips. Here are some ideas:

Everyone has their own definition of ‘healthy’, but I’d definitely place these fava bean chips closer to the ‘healthy’ end of my own personal spectrum. They’re like 95% beans, which can’t be bad, right?

And even though I did add some oil and parmesan cheese to my roasted fava beans, they’re a good alternative to the big bag of crisps that I usually crave, while still tasting amazing and totally hitting the ‘crunchy snack’ spot. 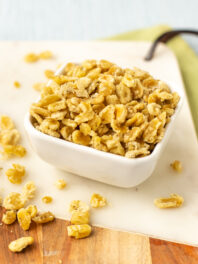 Note: Nutritional information is approximate, and will depend on exactly what ingredients you choose. Information above is for 1/6 of the batch.

Looking for more lunchbox snack options? These carrot and cheddar bites are ideal:

How do I get that crunch? I overcooked them and almost broke my teeth lol

I've just updated the recipe and it should be slightly less crunchy this time :)

.........why not mention Christmas in March ? Historians/theologians reckon it was on or around 20th March to early April that He was actually born.

(Excellent recipes, by the way !)

Interesting, I didn't know that! :)

I can not find fava beans anywhere! would you mind linking them?

I used these ones :) https://hodmedods.co.uk/collections/beans/products/split-fava-beans

You can bake uncooked beans instead of boiling them ?

Have you tried this? I don't think it would work.

I can only find un-split fava beans. Tried once, and seems very hard to bite. Almost lost my molar. :(

That's a shame - I guess un-split fava beans will take a lot more cooking to soften them up, since they're twice as thick!