Pasta in a creamy mushroom and white wine sauce

Sooo, I suck. Pretty much two weeks since my last post! There are a multitude of reasons for this including our house moving all over the place, various people being at work allll the time (yesterday my boyfriend finished a 30 hour shift, no lie!), and sheer laziness. But aaaanyway, I’m back, hello!

I wasn’t initially going to post this recipe because, I mean, creamy mushroom pasta = delicious, but not that interesting. Plus I’ve posted a recipe fairly similar to this before (it was actually my first ever post here, so please excuse pretty much everything about it). In fact I only decided to make this because I had a little bit of cream that desperately needed using up (two days past the date is okay, right?). 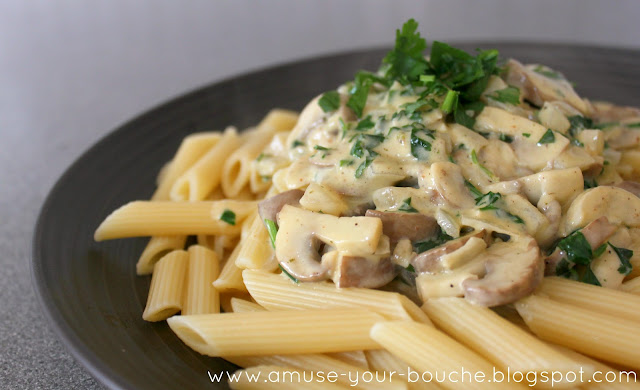 Howeeever, then I tasted it and I was like ‘ohmagaaaah, Becca get the camera, this must be shared’ (and I’d obviously had a glass of wine by this point so these were the exact words I used when talking to myself).

Once I started eating this I just couldn’t stop, it was so good. One of those dishes that you (or just me?) pretty much inhale (I’m aware that I seem to say this an awful lot, I should really start chewing my food).

I couldn’t even stop myself from digging in before I’d finished taking photos: 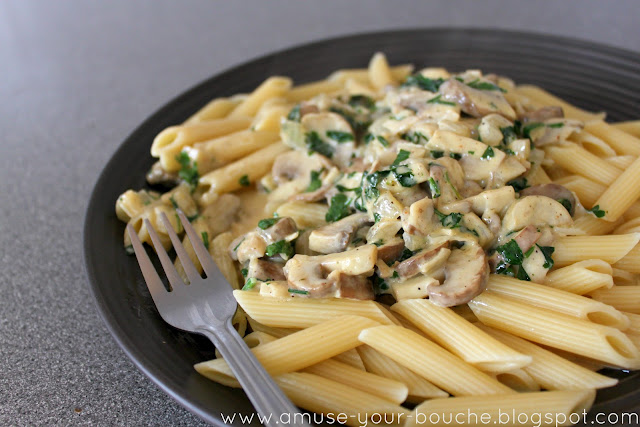 I think the reason this version was so much better than the last one I posted was that this one includes wiiine, which is clearly a plus. And don’t tell anyone I said this because I’ll get told off by people who do things properly, but the wine I used cost about £3, so it doesn’t even need to be good wine.

Totally unrelated, but how gooood does the new film of Les Miserables look?! It’s my favourite musical; I’ve only seen it once live but I can already guarantee that I’ll watch this new film many many many more times. I might just admit to you that I spent yesterday afternoon sipping wine and singing along to the Les Mis soundtrack at the top of my voice… unless you’re someone who currently thinks I am at all cool, in which case no, I was doing far cooler things than that.

Pasta in a creamy mushroom and white wine sauce

Boil the pasta according to the instructions on the packet.

Meanwhile, melt the butter in a frying pan and add the oil. Gently cook the onion and garlic over a medium-low heat for a couple of minutes, and then add the mushrooms. Cook for 5 more minutes, stirring regularly, until the mushrooms have released some of their liquid and have begun to soften. Add the white wine and vegetable stock, and turn the heat up to medium-high. Simmer for 5 minutes, or until the liquid has reduced and thickened slightly. Add the cream, nutmeg and plenty of black pepper, and simmer for a further 5 minutes until the sauce has reached your desired consistency (you can always add a little more water if you find it has reduced too much). Stir through the chopped parsley, and serve with the cooked pasta.

Looks so tasty! I will be whipping up a dish of this over the weekend! Thank you!!

I searched white wine pasta for some wine I need to use up anmd yours was near the top Becca. This looks delicious.. making it tonight :)

Oh good, I must be doing something right haha. Enjoy! :)

Thanks for linking this in. Cheers

Hi there. This week's Food on Friday is all about mushrooms! So it would be great if you linked this in. This is the link . Have a good week.

haha i totally understand! when i have a food i like i can gobble it up in minutes! this looks like just that kind of food :) mmm!