Something that Maya from Alaska From Scratch posted on her Facebook page got me thinking – how have your tastes (in food or otherwise) changed as you’ve grown older? I think I still like pretty much the same things that I did as a kid. Althoooough, I used to look forward to being a grown up because I wanted the freedom to be able to mix jelly beans, ice cream, biscuits, marshmallows, chocolate sauce, dolly mixture, and pretty much every other thing that contains sugar in a massive bowl and then to just grab a spoon and dig in. Whereas now… yeah, just no. That sounds gross.

My favourite vegetable has never changed though, it’s always been the humble potato (if that counts as a vegetable… which I think it should, because it makes me feel healthier). Don’t ever ask me ‘is that enough potatoes?’ because the answer will always be no. There is no such thing.

There’s no denying, though, that on their own, potatoes can be slightly tasteless – that’s why they make such a good base for all sorts of toppings and add-ons. So this soup also contains spring onions (that’s green onions or scallions to some of you) to give it a more intense flavour to go along with the comforting heartiness of the potatoes. 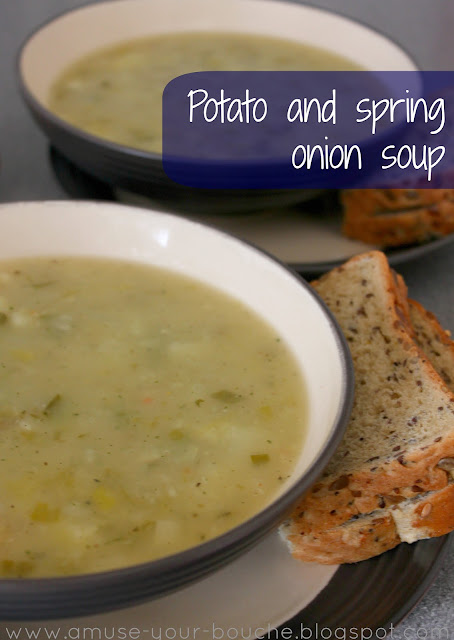 I like my soup to have a bit of texture so I didn’t blend it, I just mashed the potatoes slightly with the back of a wooden spoon (they should be nice and soft) so that they added a nice creaminess to the soup, but there were still some chunks. If you’d prefer a smooth soup you can stick it in a blender. 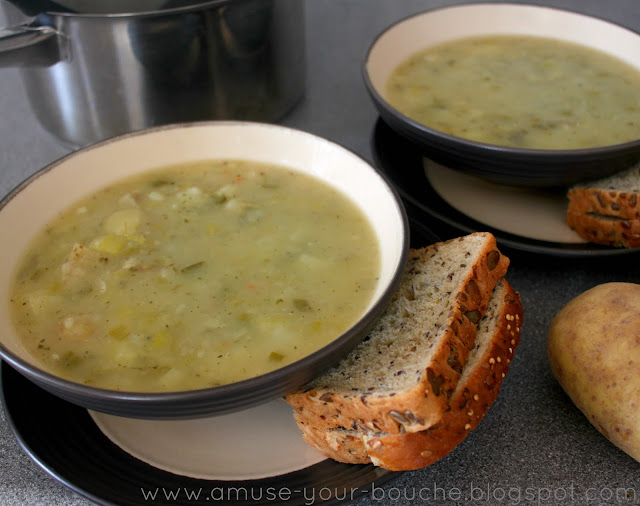 Once again, look at me embracing the autumn! Yes! Soup! Make it!

(plus this is seriously easy so while it’s bubbling away you can go back to browsing Pinterest for Christmas presents… no? Too early?)

Heat the oil in a large saucepan and cook the onion, spring onions and garlic over a low heat for 5-10 minutes, until soft. Then add the remaining ingredients, with lots of black pepper, and enough hot water to generously cover the potatoes. Cover the pan and turn the heat up slightly to bring it to a simmer. Cook for 30-40, stirring occasionally, until the potatoes are very soft. Squash them with the back of a wooden spoon (or carefully blend the soup if you’d prefer it to be smooth), and serve with bread.

Hi There, just looking for the print button, just found you blog and I really like what I see.

I love vegetables so much that it's hard for me to pick a favorite! Potatoes are high on the list! Your soup is perfect for this weather - warming and comforting and so delicious!

I love potatoes! It bothers me when people hate on them. They are definitely comfort food to me. I much prefer my potato soup a little chunky too!

yes! i am obsessed with potatoes too! i love every. single. kind. this looks really amazing, another to add to my must try list!

Thanks so much for dropping by today and for your sweet comment. I love potatoes too and I can never get enough. This soup is on my recipe list, thank you! Happy to be your newest follower on FB, Pinterest and GFC. Have a great weekend!