What's the difference between a soup and a chowder? I always thought a chowder was just a chunky soup, but there are some chunky soups that I would never call a chowder (I've never heard of minestrone chowder), so... who knows. I'm definitely going to call this a chowder though, since it means I can sing 'chowdaaaaah' while I'm prancing round the kitchen.

(and now the word 'chowder' has lost all meaning)

Corn chowder is one of my favourite soups - I go a bit mad for sweetcorn (there was a time when I probably had it in about 80% of my meals, it's great mixed in to just about anything), and you can't beat a thick, comforting soup. After a surprisingly lovely summer, the weather is starting to cool off here, so my mind is beginning to stray away from cold salads and fresh summer vegetables, and towards warming soups - and corn chowder is top of my list.

The creaminess is also added to by partially blending the corn - just enough for it to break down and make the soup nice and thick. I also left some of the vegetables whole though, since I think it adds a more interesting texture. It's up to you - if you prefer a smooth soup then blend the whole lot! But you might need to call it coconut corn soup instead of coconut corn chowder (...did we decide that was the difference? I have no idea).

By the way, yes that is naan bread - not the usual accompaniment to corn chowder, but it worked really well! Gotta love using up random leftovers in successful ways! 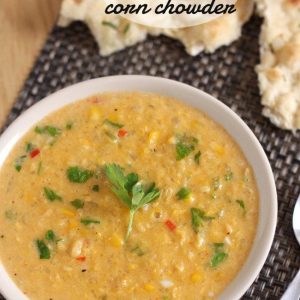