4 hrs 10 mins
4 people
This slow cooker tagine couldn't be easier to prepare - just throw everything in and turn it on!
Jump to Recipe Pin Recipe Rate this Recipe 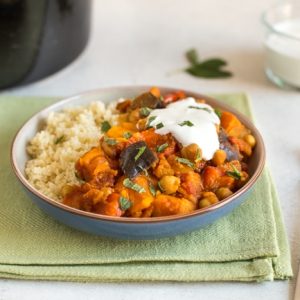 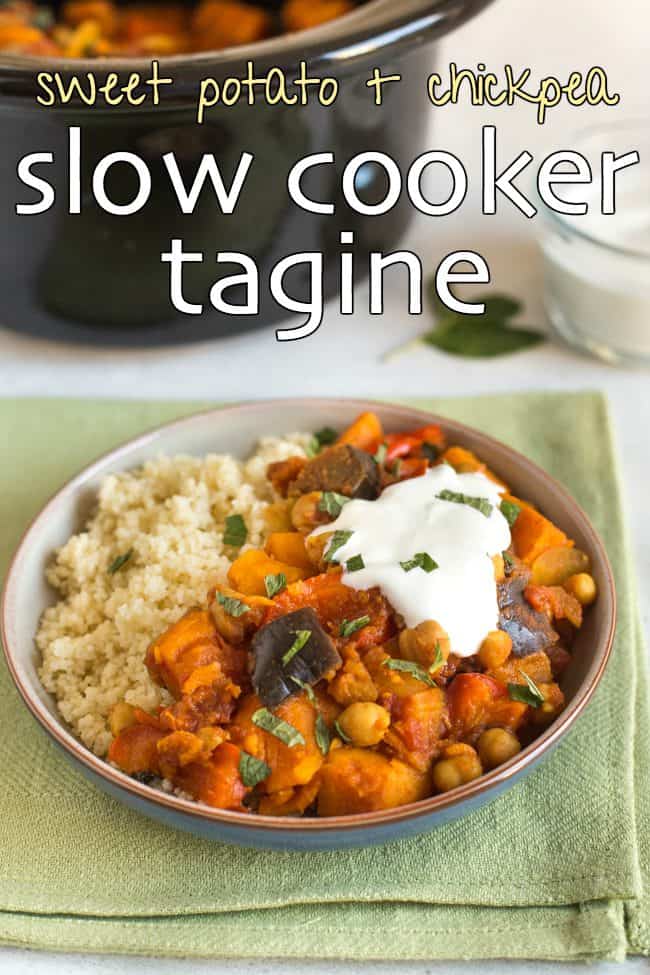 A tagine is usually cooked in… well, a tagine. It’s a North African stew that’s named after the pot it’s cooked in, with its characteristic pointy top (something like this*). I do actually have a lovely tagine, but I know not everybody does – not everyone has space in their kitchen for a piece of cookware that’s dedicated to one particular dish (to be honest, I don’t either, but I’ve crammed it in somewhere). Slow cookers are much more common, and much more versatile, so this time I thought I’d make a slow cooker tagine, with sweet potatoes and chickpeas. 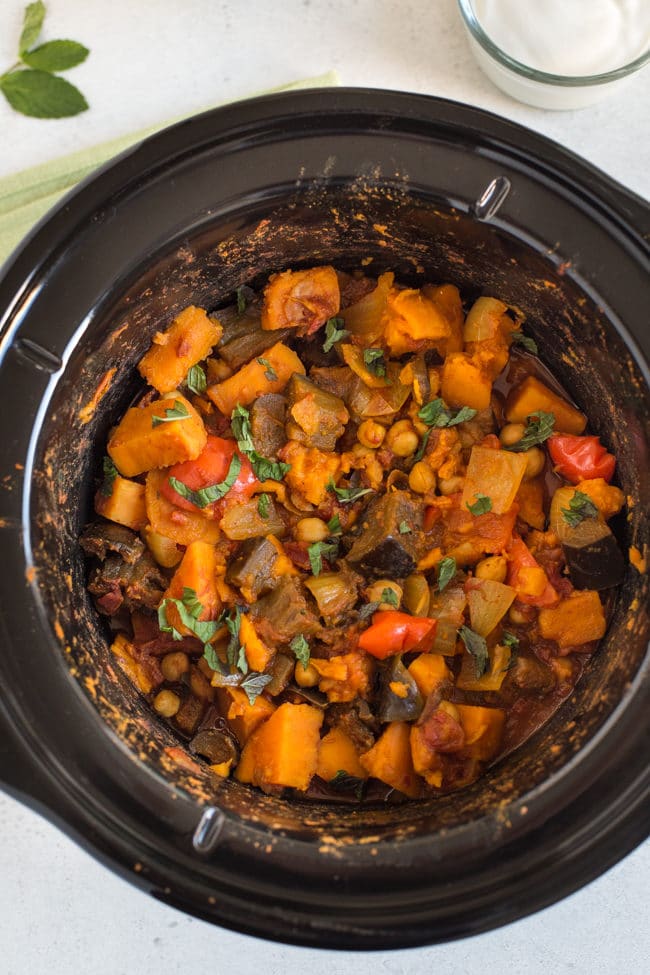 You can put whatever kinds of vegetables you like in your slow cooker tagine, as long as you make sure it’s the kind of veg that benefits from long, slow cooking. I probably wouldn’t add courgette (zucchini) or anything similar, as it will just cook down to a squidgy mess. Something like aubergine (eggplant) is perfect – it ends up nice and juicy and soft, and melts in your mouth, but still holds its shape. You’ll often find dried fruit (dried apricots, that kind of thing) in a tagine, but I prefer using sweet potato, which adds a bit more of a subtle sweetness.

Once you’ve added your veg, you just need to add some of those amazing North African spices – cumin, cinnamon, turmeric, paprika… the flavours are gorgeous. 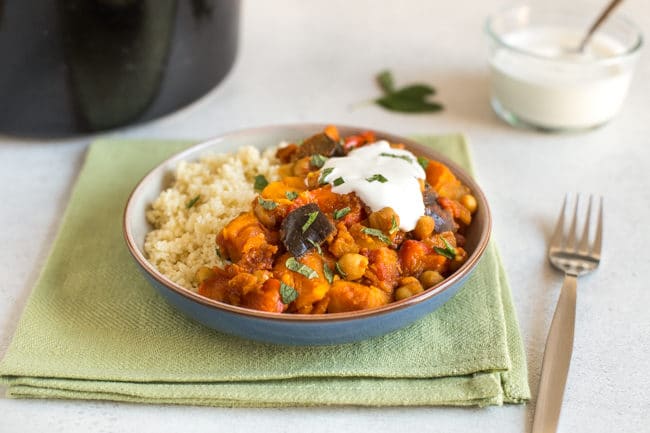 This slow cooker tagine is perfect served with couscous and a dollop of yogurt (use soy yogurt to keep everything vegan), plus a sprinkling of chopped mint to make it feel really nice and fresh. I love this kind of healthy comfort food! 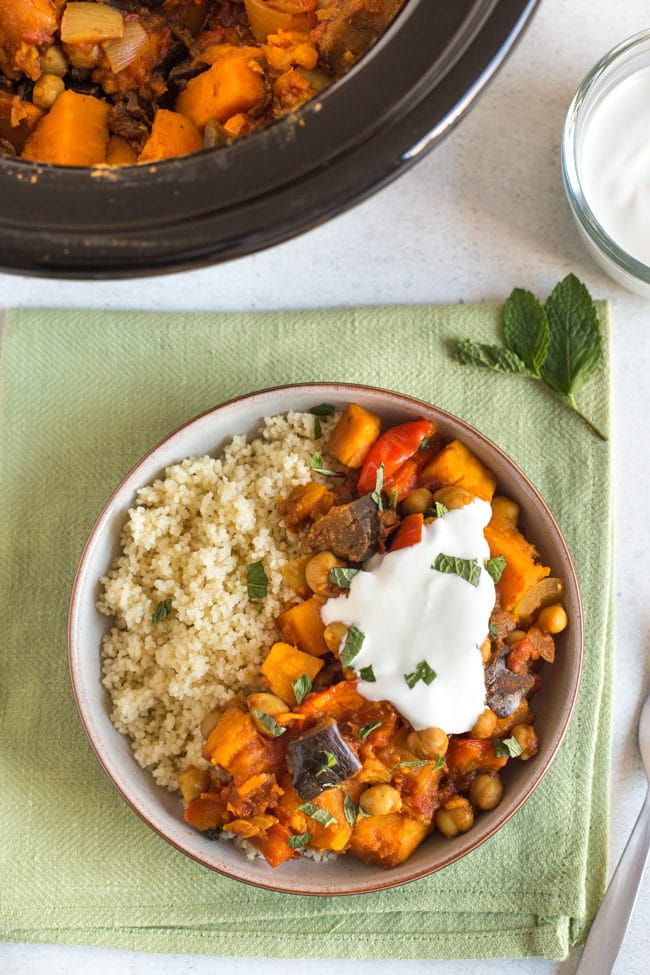 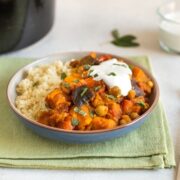 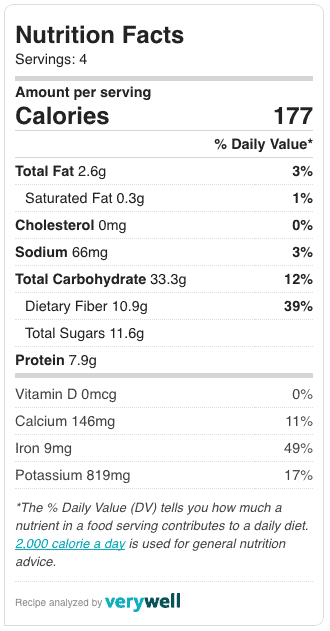 Note: Nutritional information is approximate, and will depend on exactly what ingredients you choose. Information above is for 1/4 of the recipe.

Here’s another easy slow cooker recipe, and one of my most popular – Crock-Pot mushroom stroganoff! 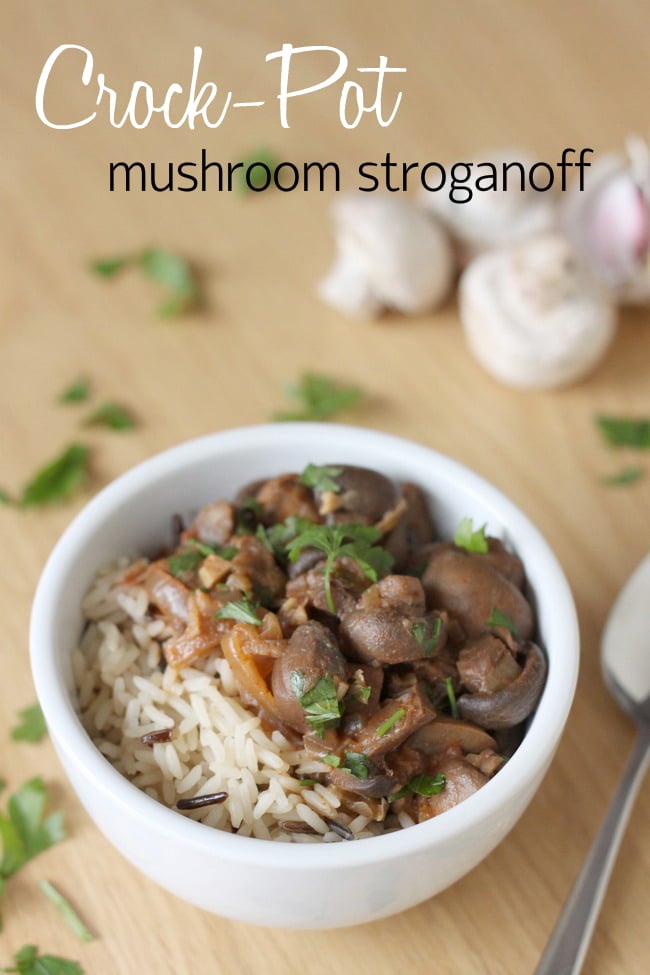 * This post contains an affiliate link. If you make a purchase using this link, I will receive a tiny (tiny!) payment, at no extra cost to you. Thanks for the support!