This self-crusting quiche has no pastry, but still heaps and heaps of flavour! It forms its own crust thanks to a special extra ingredient.

This spinach and goat’s cheese self-crusting quiche is so much tastier than I ever dreamed it would be! Unlike most quiches, there’s no pastry – instead, a bit of flour in the mixture helps it to create its own crispy crust, and it’s packed with tangy goat’s cheese, garlicky spinach, cherry tomatoes and toasted pine nuts!

What is a self-crusting quiche?

Before I started work on this incredible recipe (if I do say so myself), I never really understood the point of a self-crusting quiche. Surely one of the best bits of a quiche is the pastry, so why would you want to get rid of it?

Well, it turns out a quiche can still be pretty incredible, even without the pastry. When the filling tastes this good, the pastry would be the blandest part anyway.

Genuinely, I will never make a quiche with pastry again.

(I mean, it’s not something I did often anyway… but you know)

I chose to go for spinach and goat’s cheese inside my self-crusting quiche. The two go beautifully together, especially when the spinach is sautéed with an outrageous amount of garlic.

Just cook the garlicky spinach in a pan, and set it aside. Don’t forget, you’ll need to use approximately fifty bags of spinach to make one quiche.

(it only needs one big bag really, but doesn’t it always feel like you need so much, since it cooks down to basically nothing?!)

Once your spinach is sorted, it’s time for the egg mixture! I wanted this to be a truly irresistible quiche – if you’re taking away the pastry, after all, you want the rest of the quiche to be something a bit special.

So as well as the obvious eggs, I added some cream, and also stirred some grated cheddar cheese right through the mixture. It makes such a difference having the cheese throughout the quiche, rather than just sprinkled on top – it makes it taste infinitely more amazing!

Finally, the all-important flour. This is what’s going to help form the crust of the self-crusting quiche. It also gives the quiche a really lovely texture – it’s a little denser than a normal frittata, but I don’t mean that in a remotely bad way. It just makes a really beautiful, filling, fluffy, cheesy quiche.

Pour the egg mixture into a cake tin (don’t forget to grease it thoroughly!), scatter the garlic spinach and some soft goat’s cheese on top, and poke them down into the egg. You could mix it straight into the mixture if you prefer – I just wanted to make sure it was all evenly distributed.

Plus, it’s pretty fun to dunk everything down into the egg with a pokey finger.

I also added some cherry tomatoes on top – no dunking for these, as they roast up nicely when they’re left exposed. Similarly, a few pine nuts sprinkled on top get nice and toasty in the oven!

When you take your self-crusting quiche out of the oven, it will probably have risen halfway to the ceiling, due to both the eggs and the self-raising flour. It will drop a little as it starts to cool, but don’t worry – it’s still beautifully fluffy inside!

Let it cool for a few minutes, then remove it from the cake tin.

What to serve with quiche?

Personally I think this spinach and goat’s cheese quiche is stunning enough to make for guests – I’d be so proud to present this to my friends, perhaps under a dome that I can lift up with a flourish, to a chorus of ‘oohs’ and ‘ahhs’.

Luckily, it’s also easy enough that you can make it just for yourself, to eat in your PJs.

There are all sorts of ways you could serve this quiche:

Can I adapt this self-crusting quiche recipe?

Of course! I’m no quiche dictator.

If you’re not a fan of spinach or goat’s cheese, feel free to use something else instead.

Any veggies would be nice, just make sure you cook them first, especially if you go for something that releases a lot of water as it cooks, like mushrooms.

For the best flavour, most veggies are best roasted – roasted peppers, onions, mushrooms, asparagus, even roasted broccoli and roasted cauliflower! Then add them to the egg mixture like I did with my spinach.

As for the goat’s cheese – feel free to swap it for feta cheese, dollops of ricotta, or anything else you fancy. They’ll all make an incredible self-crusting quiche. 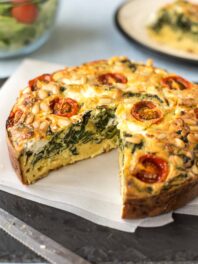 Note: Nutritional information is approximate, and will depend on exactly what ingredients you choose. Information above is for 1 slice (1/6 of the recipe).

Prefer a pie with pastry? Try my creamy vegetable and halloumi pie!

I followed this recipe. It is perfect. Kids love it.

Thanks Joseph, that's lovely to hear!

This looks amazing! I want to make this but unfortunately I don’t have the pan it calls for. Would a pie pan work? And if so, should I reduce the recipe?

By 'pie pan', do you mean like a shallower dish? You could definitely use a shallower dish and then either make two of them, or just halve the recipe. You'll need to reduce the cooking time too. Let me know how you get on :)

Can you use all purpose flour?

You could, but it will end up denser than my version. If you don't have self-raising flour, I'd recommend adding some baking powder instead: https://www.delish.com/uk/food-news/a32237313/how-to-make-self-raising-flour-from-plain-flour/#:~:text=Just%20add%202%20teaspoons%20of,bowl%20and%20whisk%20them%20together).

hi this recipe looks amazing! i plan to try it tomorrow. is it possible to freeze leftovers? i live alone so i can't eat this all at once, but i also don't have a smaller baking tin xD thank you!

I haven't tried freezing it but it's definitely worth a try! :)

Becca I made this tonight and it was amazing. I added sauteed mushrooms and had to make it gluten free for my husband my using Bob's Red Mill 1 to 1 baking flour plus one teaspoon of baking powder. Otherwise I followed your recipe exactly. Thank you for another great recipe!

Oh yay! Really glad you enjoyed it, and thanks for the info about how to make it gluten free :)