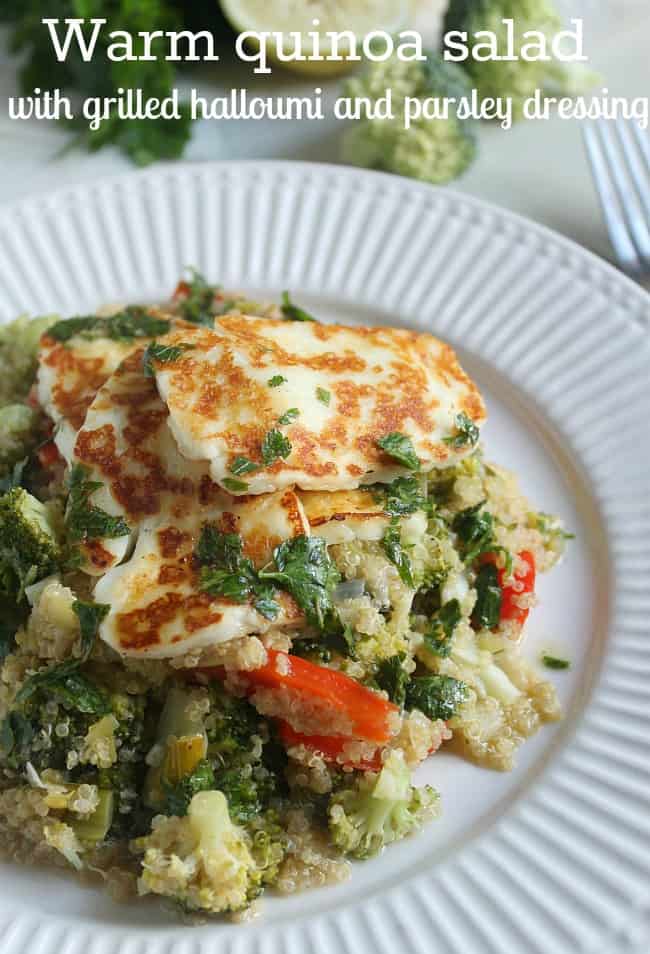 Anyone who’s ever tried halloumi cheese will understand why I’m so excited about this recipe. As you all know, I’m a bit of a cheese fanatic, and halloumi is one of my absolute favourites. It’s irresistibly moist and chewy, and its mild but salty flavour goes with just about anything. This time I paired it with a simple quinoa salad with leeks, broccoli and red pepper.

This is only the second time I’ve cooked with quinoa (the first was for my slow cooker lentil and quinoa tacos), but everyone seems to be obsessed with it these days, and I’m starting to see why. As with most things of its genre, it doesn’t have a huge amount of flavour on its own, which means you can dress it up however you like. It reminds me of couscous, but it’s higher in protein, which is always a good thing – and it’s gluten free! Plus it’s fun to watch that little spiral-shaped germ gradually separate (I think I need to get out more). 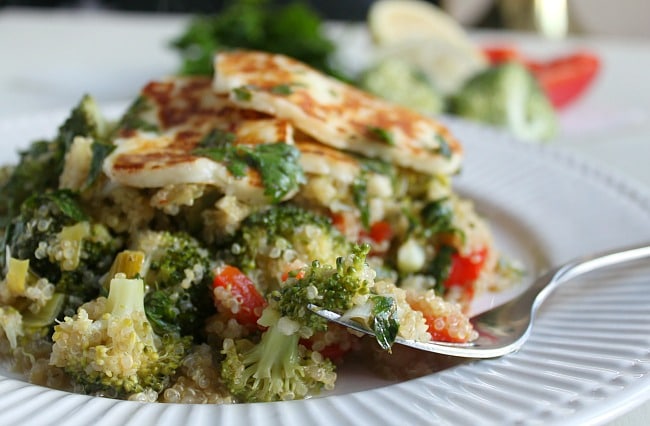 Aside from the halloumi, this quinoa salad cooks up in one pot, so it’s perfect if you’re not a fan of washing up (…so, everyone, right?). It’s pretty versatile too – if you’re making this as a whole meal, it’ll probably do 2 people, but you could also serve it as a side dish alongside something else (in which case it’ll go a bit further). You can skip the halloumi if you want to (I don’t know why you would, but you could), but I’d keep the parsley dressing since it adds so much flavour to the quinoa. It’s a really simple dressing – just fresh parsley, lemon juice, olive oil and salt and pepper – but it really brings the dish to life.

I love recipes like this, where everything’s all mixed in together and you can just mix and match what you want on your fork each time. I find it strangely comforting when everything can piled up all together in a bowl rather than laid out separately on a plate. I know, that’s weird. Let’s get on to the recipe.

What’s your favourite quinoa recipe? I could use some ideas! 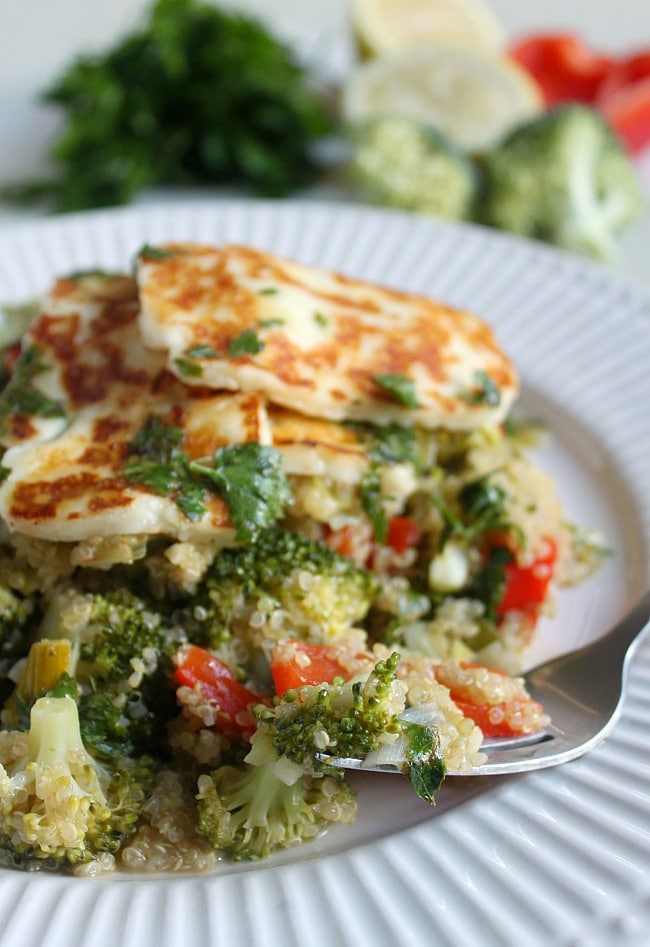 This looks great! I know I'm late to the party, but my favorite way to use quinoa is in a tex-mex salad, with black beans, corn, chopped red onion and/or scallions, tomato, red and/or green pepper, cilantro, avocado, and a lime vinaigrette. I've taken this to potlucks many times and have noticed that people sometimes eat it as a salsa, with chips, but it's also really good on its own or as a side. Without the avo and tomato, it keeps well for a few days, too.

That sounds delish, just my kind of thing :)

This was soooo yummy! Quinoa, broccoli and halloumi are three of my favorite things. I am linking this recipe on my Friday Favorites this week. :)

Yay! Glad you liked it Courtney! :) thanks for letting me know!

Quinoa portion of this recipe is not pleasant at all. The cooking times are way off - quinoa does take about 15 minutes to cook but broccoli is inedible mush at that point. I added it at the ten minute mark and it's still been cooked to mush.

Hi Sara, sorry you found that! If you like your broccoli more al dente just add it a bit later.

Yum. Made this for dinner and both myself and my 5 year old enjoyed it. I grilled the haloumi on my foreman grill, halved the initial amount of oil and omitted a tablespoon of oil from the dressing, still lovely and comforting.

Thanks for your comment Hannah, really glad you both liked it! :)

this looks absolutely delicious!!!! your photos are beautiful too!