A super simple recipe for easy homemade Parmentier potatoes - small and ultra crispy potato cubes flavoured with rosemary and garlic. The perfect side dish for a special occasion!

The humble potato has got to be one of the most incredible foods on the planet. It doesn't look like much, but man, it can make a good meal. Parmentier potatoes are one of my all-time favourite potato side dishes - they're super crispy, herby and garlicky, and pretty much just everything that a potato dish should be.

What are Parmentier potatoes?

Parmentier potatoes were named after a French man called Antoine-Augustin Parmentier, who lived in the 17 and 1800s, and is apparently best remembered as a 'vocal promoter of the potato'.

In my view, they're like a mini version of a classic roast potato, except with even more flavour, and even more crispy bits.

How do you make Parmentier potatoes?

There are various methods of making Parmentier potatoes. As I was researching this recipe, practically every single recipe I looked at used a different cooking method.

It seems that the end result is far more important than the cooking method you use - as long as you end up with delicious Parmentier potatoes when you've finished, I don't suppose it matters too much which method you use.

So, as you might expect - I went for the easiest method, which requires the least amount of effort possible. Because who wants to make life harder for no reason?

Step 1: Peel and cut the potatoes

As you may know, I try to avoid peeling my vegetables if I can avoid it, but this is one of those occasions where it's actually worth doing.

Just peel your potatoes, and cut them up into little cubes. Ideally, your cubes will be about 1-2cm in size. They do shrink a little as they cook, so don't go too tiny.

Try to get the cubes vaguely even so they cook at the same rate - but don't worry if it's not perfect. It actually gives a nice little bit of variety if some of your potatoes end up crispier than others!

Step 2: Roast with garlic and rosemary

Add some sprigs of fresh rosemary and some whole cloves of garlic to the tray. Obviously the bulk of these will be removed before serving (I'm not suggesting you munch away on a whole stick of rosemary), but they infuse an amazing flavour into the potatoes.

Toss everything in a good amount of oil, and pop them in the oven to roast.

Yep, that's all there is to it. Just make sure you remove the whole cloves of garlic and any particularly woody stems of rosemary before you eat.

This is the sort of recipe that I really love. It really couldn't be an easier potato dish - but it couldn't be more delicious either! These potatoes seem a little fancy, and they're the sort of thing I'd be proud to serve for guests, but they're also ultra easy to make.

How to serve Parmentier potatoes

Parmentier potatoes are very definitely a side dish - they need something alongside them to create a full meal.

They're the perfect accompaniment to a roast dinner (even a fancy one like for Christmas or Easter!).

Of course, if you're a vegetarian you won't be making any type of roast meat, but that doesn't mean you can't make a brilliant roast. Here are a few ideas of things to serve alongside your Parmentier potatoes:

Any of these would work really well with some Parmentier potatoes and some extra veggies. 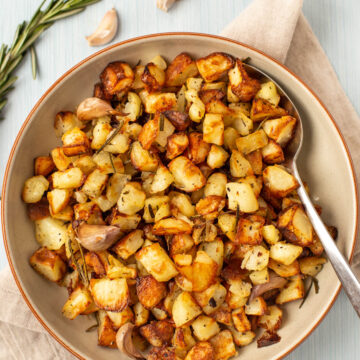 A super simple recipe for easy homemade Parmentier potatoes - small and ultra crispy potato cubes flavoured with rosemary and garlic. The perfect side dish for a special occasion!

If you need to reheat any leftovers, it's best to use the oven, as potatoes can lose their crispiness in the microwave.

Looking for another side dish good enough for a special occasion? This creamy sweet potato gratin is perfect: