It's another low-carb recipe using the magic that is cauliflower! I'm sure you've noticed that I don't follow a low-carb diet (potato in your noodles, anyone?), but I do love to experiment with all kinds of recipes, and using cauliflower to create a low-carb version of an old favourite is something I've done several times before - cauliflower tabbouleh, cauliflower tortillas, cauliflower risotto... to name but a few. This low-carb cauliflower hummus is another amazing, easy way to reduce your carbs, and sneak an extra veggie into your diet while you're at it.

Just a quick disclaimer, before I get stuck into the recipe: I'm not for one second saying that carbs (especially protein-rich carbs like chickpeas) are bad, or that we should all avoid them completely - I'm a great believer in 'everything in moderation' (even halloumi pie). But lots of people do follow low-carb diets for all sorts of reasons, and this recipe is for them. It's also for people who just really flippin' love roasted cauliflower, and couldn't give a monkey's about carbs.

(Just in case you do care: this recipe contains around 12g of carbs per serving, compared to around 35g in the equivalent chickpea recipe. It also has about half the calories!)

The recipe is basically a simple homemade hummus recipe, but using roasted cauliflower instead of chickpeas. Weirdly, I never used to like cauliflower - it was one of only two veg that I would say I actively disliked, the other being peas, which I also kind of like now (is this what being an adult feels like?). But then I tried cauliflower roasted, and my opinion was immediately changed. When you roast a cauliflower, it gets such an amazing flavour - the little flowery bits get golden and crispy, and totally bring it to life.

And if you blitz up some of that roasted cauliflower with a drizzle of tahini, some fresh garlic and a squeeze of lemon juice... you've got a really amazing low-carb cauliflower hummus. If you're feeling fancy, I would definitely recommend topping it with a drizzle of extra virgin olive oil and a few toasted sesame seeds for an even more amazing flavour!

Now, I'm not trying to fool anyone here - this doesn't taste like real hummus. Nobody is going to be amazed when you tell them it's made out of cauliflower. The texture isn't too dissimilar from regular hummus, but (surprise surprise) it definitely tastes like roasted cauliflower. But if you're a fan, and you want a fun low-carb snack idea, this cauliflower hummus is the recipe for you!

Of course, you can serve your cauliflower hummus with some crackers or breadsticks if you like, but in keeping with the whole low-carb thing, I used some celery sticks. Crackers would have been better (I'm adding celery to the list of vegetables I don't like...). 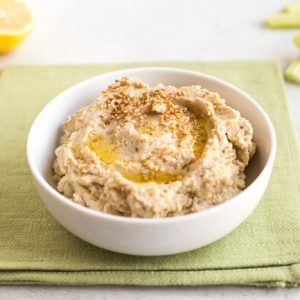 An easy low-carb hummus recipe for fans of roasted cauliflower! This is so tasty.

To make the toasted sesame seeds, add a spoonful of sesame seeds to a dry frying pan, and cook over a medium-high heat for a couple of minutes, stirring regularly, until they're golden brown. Watch them carefully, as once they start to turn they'll go quickly!

Note: Nutritional information is approximate, and will depend on exactly what ingredients you choose. Information above is for ¼ of the batch, not including toppings (you can stretch it much further if you only want a smear each!).

Not into cauliflower, but still want a low-carb option? Try my low-carb broccoli pizza crust!