These vegetarian smothered burritos are the ultimate Mexican dinner - soft tortillas stuffed with a rich mushroom and black bean mixture, and smothered with a jalapeño sour cream sauce!

You may know that I adore Mexican food. Nachos, enchiladas, burritos... basically, if something is cheesy and spicy and saucy, I am here for it.

What is a smothered burrito?

You may be wondering what on earth a smothered burrito actually is. It's pretty self-explanatory - it's a burrito that's been smothered in some kind of tasty sauce.

And when you take a burrito that's already super tasty, with a hot and cheesy filling, and then smother it in a creamy, spicy sauce... it's even better.

First up, the burrito itself!

You can obviously smother any kind of burrito (sounds a bit sinister, but it's delicious, I swear).

This time, I went for a simple mushroom and black bean filling, with rice and a rich, spicy tomato sauce. It was awesome. Feel free to use different veggies if you prefer - some peppers or chopped spinach would work nicely too. You can really stuff your burrito however you like!

Of course, it's always a good idea to add a bit of grated cheese to your burrito filling too, not only to help hold everything together (melty cheese is the perfect glue!), but also just because it's flipping delicious.

How to fold a burrito

When you've prepared your filling, wrap it up in some large flour tortillas.

It doesn't really matter how you fold your burrito, as long as you end up with everything safely wrapped up inside. But people are always telling me they have problems wrapping burritos neatly, so here's how to fold a burrito in a way that will keep all your filling safe.

First, arrange your filling in a rectangular shape in the centre of the tortilla (see image 1 in the collage below). Until you're an expert burrito roller, don't try to add too much filling.

Fold in the two short ends of the rectangle first (like I've done in image 2).

Then, you can either roll the burrito into a cylinder, or just fold in the two longer sides of the rectangle to make a flatter shape (images 3 and 4). Since we're going to be smothering that tasty sauce on top, I prefer a flatter burrito for these!

You could eat your burritos as is - but to really take them to the next level, mix up a little bowlful of this easy jalapeño sour cream sauce.

Again, the name isn't too much of an enigma - it's just sour cream mixed with finely chopped jalapeños and some fresh coriander (cilantro), along with a good pinch of salt and pepper.

Quick and easy to make, but so so good.

It's time to get smothering! Lay your filled burritos on a baking tray, and liberally slather the sour cream sauce on top.

This is not the time to be stingy.

You don't need to be tidy about it - it doesn't need to be perfectly even or anything. I actually quite like it when there are bits of uncovered tortilla poking through the sauce (they get nice and crispy!), while in other places the sauce is overflowing down the edge of the burrito. Go crazy.

Finally, pop your smothered burritos in the oven to bake.

It might seem a little odd to be baking a sour cream sauce, but it actually works really well! It keeps the burritos nice and moist, but still crispy on the edges, and the parts where the sauce itself gets golden are really yummy.

Finish with some toppings!

I know I always go on about toppings when it comes to Mexican food, but it's true - a few fresh toppings will never fail to raise your smothered burritos to the next level. I simply used some diced tomatoes, fresh coriander (cilantro), and some extra jalapeños, but there are all sorts of things you could pile up on top of your burritos:

Stack them high and dig in! 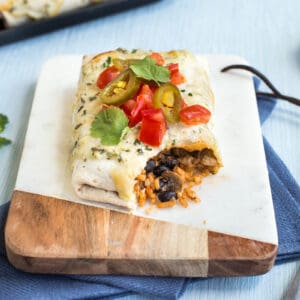 These vegetarian smothered burritos are the ultimate Mexican dinner - soft tortillas stuffed with a rich mushroom and black bean mixture, and smothered with a jalapeño sour cream sauce!

If you love Tex-Mex food, my bumper collection of 40+ vegetarian Tex-Mex recipes will keep you going for months!