These cheesy potato cakes are stuffed with creamy garlic mushrooms, fried until crispy, and served in a garlic cream sauce - utterly irresistible!

I think I may have died and gone to heaven. These cheesy potato cakes contain pretty much every one of my favourite ever ingredients - mushrooms, potatoes, cream, garlic, cheese... all combined into one perfect little package, and smothered in a creamy sauce. Perfection.

These potato cakes do take a bit of effort to make - they're not difficult, but they're not super quick to make either. But believe me, they're more than worth it (or if you're feeling a bit lazy, keep reading for an easy way to make them more quickly!).

The base of the recipe is essentially a cheesy mashed potato, stuffed with a creamy, garlicky mushroom mixture, and then fried in little patties until the outside gets nice and golden.

Add the creamy, garlicky sauce as well, and you've got heaven on a plate.

To make these cheesy potato cakes, I used a cheese that I've never used before. I know! I didn't think there would be any cheeses I hadn't tried yet either.

Dziugas (or more accurately, Džiugas) is a cheese from Lithuania, which you can buy either in a block, or pre-grated in a bag - it's available in Sainsbury's and Selfridges, for those of us in the UK. It's similar to parmesan in that it's hard and full of that salty umami flavour, with a lovely mild nuttiness.

According to Lithuanian legend, the cheese was made by the giant Džiugas to celebrate marrying the love of his life. He gifted it to local villagers with the promise that it would bring them strength and joy!

Since I was using a Lithuanian cheese, I thought I'd take my inspiration for this recipe from Lithuanian cooking - so this recipe is very loosely inspired by a Lithuanian dish called cepelinai, which is sometimes considered to be one of the national dishes of the country.

Before you tell me off for being inauthentic, Lithuanians - this is not an actual recipe for cepelinai. Proper cepelinai are boiled rather than fried, and are made from a mixture of both grated and mashed potatoes. I'm sure there are other differences too.

This is merely a recipe I dreamed up after reading all about cepelinai, and deciding that cheesy potatoes with mushrooms sounded like something that definitely needed to happen in my kitchen.

To start with, you need to prepare the creamy mushroom stuffing. It's really simple - a classic combination of mushrooms, garlic, parsley, and just enough cream to bring it all together.

Even just this mixture alone is positively dreamy.

Next up, make the mash.

You need a fairly dry mash for this recipe, so I cooked my potatoes in the microwave - it stops them getting as wet as they would if they were boiled in a big pan of water. Just cook the potatoes whole, then scoop out the middles, and mash it all up with some of that tasty Dziugas cheese.

The mash should end up thick and fairly dry, almost like a dough.

The grated Dziugas cheese really lifts these mashed potato cakes and makes them extra irresistible - the cheese is nice and mature, so you don't need a huge amount to add heaps of flavour to the potatoes.

Once your mash and your mushroom mixture are both ready, it's time to get stuffing! Just take a bit of mashed potato in your hand, add a spoonful of the filling, and finish with some more mash on top.

Once your mashed potato cakes are all formed, you're ready to get frying.

I fried my cheesy potato cakes in a mixture of both butter and oil - the butter is there for flavour (everything is better fried in butter!), and the oil stops the butter from burning. It's a great team.

As the potato cakes are fried, the cheese melts down and creates an extra crispy exterior. Crispy cheese is the best.

In my opinion, very few things aren't improved by being smothered in a creamy sauce, and these potato cakes are no exception.

The sauce is basically garlic, parsley, cream... all yummy things.

I had a small amount of the mushroom stuffing left over after filling all my potato cakes, so I added that to the sauce too. If you don't have any left over, you can always add some extra fresh mushrooms, or sauté up some onion or leeks to add to the sauce instead, if you fancy. It's easy to adapt.

How should I serve these mushroom-stuffed potato cakes?

To be honest, we just ate these potato cakes on their own (with the sauce, of course!) for lunch. They're so ridiculously delicious that I didn't feel any desire to dilute my enjoyment by putting anything else on the plate.

They'd also be good served as a side dish though, so if you want to add some sort of protein and some extra green veg on the side, that would work well too!

Or, they'd make an elegant appetiser for a dinner party - just give everyone one potato cake each, nestled in a little lake of creamy sauce, and your guests will definitely be impressed.

How can I make these potato cakes quicker to make?

Personally I think the effort involved in making these cheesy stuffed potato cakes is more than worth it. But, I do appreciate that they're not the quickest of my recipes (you might be more used to seeing me post 20 minute dinner recipes!). Luckily, there is an easy way to make these potato cakes much quicker to prepare - make them unstuffed!

The creamy sauce that I served with my potato cakes is actually really similar to the mushroom mixture I used to stuff them - it's basically just thinned out with more cream. So if you can't be bothered to stuff each potato cake individually, just make plain potato cakes, and add all of the mushrooms to the sauce instead.

Your potato cakes won't look as impressive when you cut into them, but they'll still taste just as incredible.

Can I prepare these potato cakes in advance?

Yes! You can make the mashed potato, and form the potato cakes, earlier in the day, or even the day before you need them.

Even when fully cooked, they reheat pretty well in the microwave, so don't worry if you have some leftovers after cooking them.

But, if you're serving these potato cakes to guests, and you want the quality to be truly top notch, it's best if you shape the potato cakes, then store them in the fridge, and fry them up just before serving - this will ensure that the golden coating stays nice and crispy!

However you prepare them... you really can't go wrong. These mushroom-stuffed cheesy potato cakes are truly irresistible. 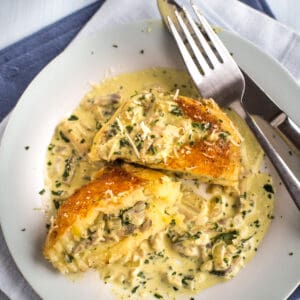 These cheesy potato cakes are stuffed with creamy garlic mushrooms, fried until crispy, and served in a garlic cream sauce - utterly irresistible!

For the creamy sauce:

Feel free to use leftover cheesy mashed potato to make these potato cakes, if you have some. For the full recipe you'll need around 1kg / 2.2 lb leftover mashed potato.

If you love these potato cakes, try my creamy goat's cheese and potato lentil gratin too!