For some reason, lately I’ve been gravitating towards recipes that are on the healthy side. I know it might not seem like it to you, but often when I see a recipe I think ‘that looks nice; I wonder how I could lighten it up a bit?’

This was not one of those occasions.

I think that a gratin is one of those dishes where you’ve just got to say sod it, I’m going to eat loads and loads of cream and cheese and it’s going to be incredible, and I’m not going to think about the calories. A low calorie gratin would be a bit like fat free chocolate – a nice idea in principle, but in reality just a bit rubbish. 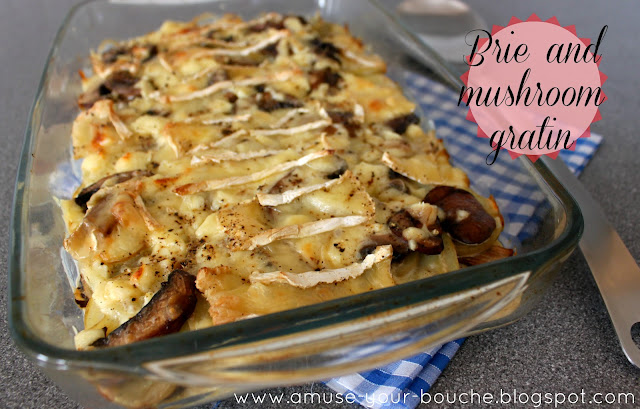 Everyone knows that while the creamy, potatoey layers underneath are gorgeous, the real star of the show is the crispy, cheesy layer on top – and the cheddar on top of this particular gratin is made even better with brie. Yes! The strong flavour of the brie is perfect to lift the creamy veg underneath to a whole new level of deliciousness. 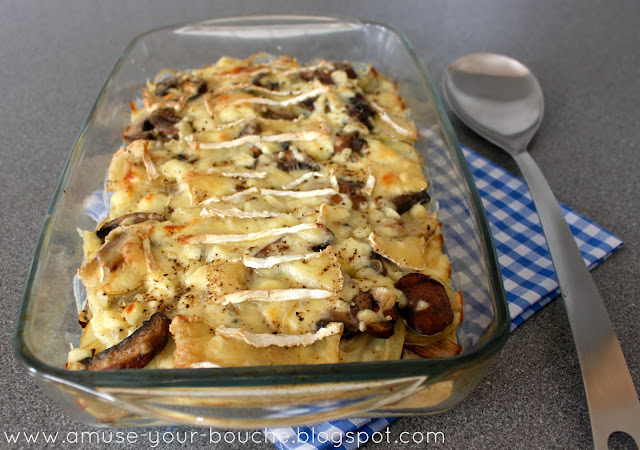 While I was incredibly tempted to return to the dish with a spoon after I’d finished my dinner and polish off the rest of this gratin while no-one was looking, I resisted, and it reheated beautifully the next day. 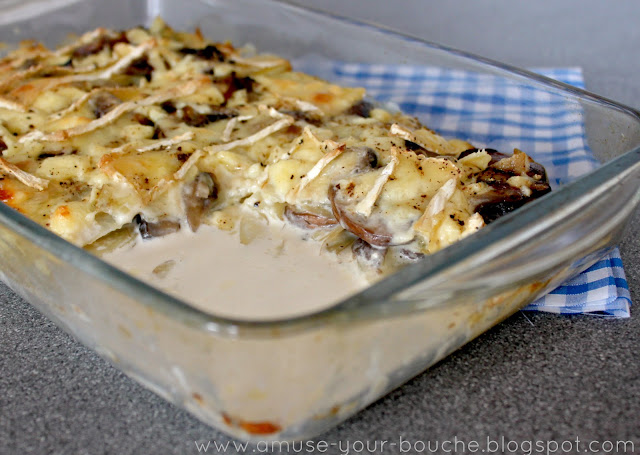 This is definitely an occasion for an ‘om nom nom’.

Slice the potatoes as thinly as you can – use a mandoline if you have one, otherwise a knife will do. Boil them in a large pan for 5 minutes, or until slightly al dente.

Meanwhile, heat the oil in a frying pan and cook the sliced mushrooms and garlic gently over a medium heat until the mushrooms are soft and have released most of their liquid. Continue cooking until there isn’t much liquid left in the pan.

Whisk the nutmeg into the cream and pour evenly across the dish. Top with the sliced brie and a generous amount of black pepper. Bake for 25-30 minutes, or until the cheese is melted and crispy, and the potatoes are fully cooked.

I made this last night for my veggie gf. It was very straightforward, and tasted great. I'm now very popular.

Glad you both liked it Henry! Thanks for your comment! :)

Looks delicious!Hello, new follower here! I would love to have you link up with my Clever Chicks Blog Hop this week!http://www.the-chicken-chick.com/2012/10/upcycled-chicken-coop-clever-chicks.html

I hope to see you there!Cheers!KathyThe Chicken Chick

I'm a big fan of anything with gratin in the title. Specially in potato is in front of it. One of your best so far!!

Ooh thank you very much! :)