This luxurious creamy veggie pasta is made in just one pot – the pasta is cooked right in with the sauce! An easy, crowd-pleasing dinner.

Just when I thought cheesy pasta couldn’t get any better… I made this one pot creamy veggie pasta. That’s right – it’s all made in just one saucepan, including all those vegetables, and the creamy, cheesy sauce! This is a real winner for busy evenings when you just need something hearty and satisfying on the table quickly.

Have you ever tried making a one pot pasta dish?

I don’t just mean boiling the pasta, then draining it and adding a sauce that you’ve prepared separately – I mean a dish that’s truly all cooked in one pan, all at the same time.

With this one pot veggie pasta, the pasta cooks right there in the sauce, making it extra thick and creamy. Even the vegetables are cooked in the same pot, meaning you only have one pan to focus on.

It’s really easy to make. Start by adding all of the ingredients to a large saucepan.

Obviously you’ll need some pasta, along with whatever vegetables you feel like adding. I used fresh orange pepper and mushrooms, as well as some frozen peas and sweetcorn.

Peas and sweetcorn are two vegetables that I often use frozen – they’re so easy to throw into all sorts of meals, and I can use as much as I want, rather than having to get through a whole tin in one go. So handy.

Of course, you can use whatever combination of fresh or frozen veg you fancy! See below for some more ideas.

Cooking pasta in a creamy sauce

Next, add the liquid.

The pasta is boiled in a mixture of milk and vegetable stock – it makes everything super creamy, and forms the basis for that cheesy sauce. As the pasta cooks, it releases its starch into the milk, thickening it up to give a glossy sauce.

I added plenty of dried herbs, and the vegetables also help to make the sauce nice and tasty as it cooks!

Since you’re not going to drain any of the liquid away, you’re also keeping hold of any goodness that’s been released from the vegetables as they cook. Usually this precious liquid is just tipped down the sink, but this time you’re keeping all that lovely nutrition and flavour.

The final ingredient is a good handful of grated cheese. Obviously.

Since the sauce is otherwise really simple, I’d recommend using a cheese with lots of flavour – I used a nice mature cheddar. Something milder like mozzarella will still be delicious, but will definitely bring less flavour to the dish.

Just mix it all together until the cheese melts into the pasta to give a glossy, creamy sauce.

I’m really not sure what could be more satisfying than a big bowl of cheesy pasta. This creamy veggie pasta is such a people-pleaser – especially since the vegetables are really easy to switch up depending on what veggies your family enjoys most.

I served some garlic bread on the side (any excuse), but a simple salad would be great too, if you want to keep things a bit lighter.

What other vegetables could I use?

You can mix up the vegetables however you like – anything that will be fully cooked in around 15 minutes is perfect.

If you want to use vegetables that cook more quickly, like broccoli or asparagus, just add them a few minutes later. Nobody likes soggy broccoli!

A few other ideas:

Basically, whatever vegetables you add to this creamy veggie pasta, you’ll end up with a tasty mixture that goes beautifully with that luscious sauce. 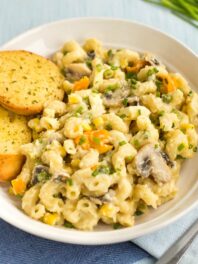 Note: Nutritional information is approximate, and will depend on exactly what ingredients you choose. The information above is for 1/4 of the recipe.

If you’re looking for more no-fuss pasta recipes, here’s one of my favourites – enchilada noodles! On the table in just 15 minutes.

Would gluten free noodles, such as banza or red lentil, work in this recipe?

I'm not too familiar with gluten-free pasta so I can't say for sure. I'd be a little concerned about how the cooking time would vary from normal pasta, since it all needs to cook together in the same time. And also whether they require the same amount of liquid as normal pasta. Might be better to cook the pasta separately and then just mix through a sauce.

Made this with ground venison because we’re meat eaters and also used Lactaid milk. Turned oit delicious! Thank you!

Glad you enjoyed it!

I followed the recipe exactly using Italian seasoning for herbs and it turned out PERFECT. The mushrooms really make it complete.

Hi, do you think Almond Milk would work? Thanks

I'm not overly familiar with almond milk but I would imagine it would work ok as long as it's not sweetened!

Easy and completely amazing! I used nice big slices of shitake mushroom. Did not miss meat at all. What are your recommended dried herbs? I just took a guess and went with basil, parsley, garlic powder.

I just used mixed herbs, which are a kind of Italian-style blend. Basil, parsley and garlic sound perfect!