This one pot vegan jambalaya is an easy dinner that only needs one pan! It’s packed with spicy rice, beans and veggies – healthy and delicious.

I know I’m a bit of a cheese fiend, but sometimes I really do just want a delicious vegan meal to make me feel good. This one pot vegan jambalaya is just the thing – plenty of veggies, hearty beans and rice, and lots of spice. It makes you feel good from the inside out.

Jambalaya is a rice dish that originated in Louisiana. Like a lot of food from that part of the world (Louisiana is known for its incredible Creole and Cajun dishes), it’s influenced by various cuisines – European cuisines like French and Spanish, but also West African food too. It’s the perfect mish mash.

Is this an authentic jambalaya?

Before I get too much hate mail, I should probably note that my vegan jambalaya is not a traditional recipe – and not only because it’s vegan. I also took some liberties with the vegetables that I included. For example, traditional jambalaya often begins with the ‘holy trinity‘ of celery, peppers and onions, whereas I used peppers, leek and carrot instead.

I think you guys know by now that I love to experiment with food, so I don’t really mind if my recipes aren’t authentic – as long as it’s delicious once it’s finished, I’m happy. If you want to find a 100% accurate jambalaya recipe that’s been passed down from someone’s grandmother, look elsewhere. But if you just want a really tasty vegan dinner, you’ve come to the right place!

How to make vegan jambalaya

I started my jambalaya by cooking up some finely chopped vegetables in a big pan. As I said, I went for carrot, leek and green pepper, but you can really use whatever vegetables you fancy.

The only thing to remember is that the vegetables will also be cooking in liquid for a while after you add the rice, so you don’t want to use any vegetables that will turn to mush when they’re boiled.

I wouldn’t use broccoli, for example – over-boiled broccoli is not good.

Any hard vegetable will work – anything that will only be improved by a long cooking time. Celery, onion, sweetcorn, sweet potato… just cut everything nice and small, and get it in the pan.

Next, add some dried rice and some kidney beans. I always use tinned beans, just because they’re so convenient. You’ll also need to add plenty of vegetable stock to cook the rice.

At this point, you can also add whatever spices and seasonings you feel like. I went for a vaguely Creole-inspired mixture (again, almost certainly not authentic, don’t shout at me!) – plenty of my favourite smoked paprika, along with cayenne pepper, dried herbs, and some turmeric to add to the beautiful colour of the spicy rice.

When the rice is cooked, add some big wedges of tomato, and serve your vegan jambalaya topped with plenty of fresh parsley.

The end result is the perfect comfort food – it’s hearty and filling, with plenty of flavour, but it’s good for you too! Win-win.

What should I serve alongside my jambalaya?

This vegan jambalaya is really a full meal in itself, so you don’t need to worry too much about side dishes. Rice and beans even go together to create a complete protein, so they’re a winning combination.

That said, I do always think it’s nice to have something on the side, just for a bit of variety. We had corn on the cob, which worked really nicely – a simple salad would go well too.

Or, you can stick with the Southern US theme, and make some cornbread to serve on the side. It’s definitely a heavier option, but a tasty way to mop up the dish! 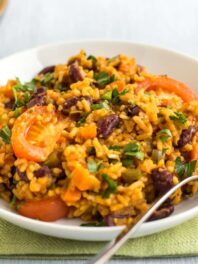 I thoroughly enjoyed this! It is spicy, but not too hot. I love the smoky smell! My fussy dad enjoyed it, too. This is definitely becoming a regular.

Thanks Jacqui, really glad you both enjoyed it! :)

Hey there, can I make this with brown rice?

Absolutely, it will just need a bit more cooking time, and probably a little more liquid.

We made tonight and was absolutely gorgeous defo saving recipe

Oooh, I have all the ingredients for this in the house! That's another day I can stay at home and avoid the shops sorted, thank you! :)

I tried this and there was an explosion in my mouth. I loved it

Thank you, glad you enjoyed it! :)